In January, Arvind Panagariya had raised the first red flag on the possibility of taxpayers being harassed post-demonetisation and had reportedly written to the 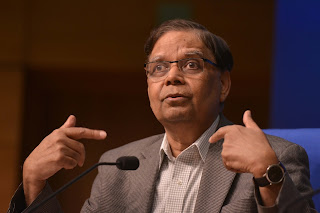 Under Arvind Panagariya, the Niti Aayog piloted several reforms ideas in both economic and social spheres, but the sudden departure of its vice-chairman has put under the spotlight the numerous occasions when difference of opinions between the think-tank and other wings of the government came to the fore.
Unlike the erstwhile Planning Commission, where deputy chairman Montek Singh Ahluwalia was the final authority after the Prime Minister, in the Niti Aayog, several important initiatives were being almost completely handled by other high-ranking officials of the think-tank, leading to creation of multiple power centres within the body. Another difference from Ahluwalia’s time at the Planning Commission was that while Panagariya was given a cabinet rank, he did not attend cabinet meetings, unlike his predecessor.
In January, Panagariya had raised the first red flag on the possibility of taxpayers being harassed post-demonetisation and had reportedly written to the Prime Minister’s Office, highlighting the need to codify rules to ensure that people, especially women, are not made to suffer for having deposited old notes between November 8 and December 30 last year.
Panagariya had suggested that there should be no questions asked on cash deposits up to Rs 2.5 lakh. This would help the taxman and the taxpayer, given the large number of depositors during the last 50 days. The income-tax department has been receiving information about cash deposits of over Rs 2 lakh and Rs 5 lakh from banks on daily basis.
During the first two years of the NDA government, Panagariya is also said to have been unhappy with the pace of reforms undertaken by the government, considering that the think-tank issued a number of recommendations for policy overhauls. The draft of Niti Aayog’s three-year action plan, which was prepared under Panagariya’s tenure, had also pointed out several concerns in the Centre’s economic policymaking that needed urgent attention. It had flagged numerous concerns including those over rising tax disputes; higher recapitalisation requirement for public banks burdened with non-performing assets; and, scope for interpretation in tax laws.
The document, which was released in April this year, also flagged the fundamental issue in the country’s expenditure planning which had a “strong tendency” towards revenue expenditure at the expense of capital expenditure. It also noted that within revenue expenditure, subsidies had overshadowed expenditure on social sectors such as health and education.
The Niti Aayog, under Panagariya, also faced flak from RSS affiliate Swadeshi Jagran Manch, which organised a roundtable on the think-tank’s functioning in January and criticised various recommendations put forth by it including for sectors such as agriculture and health. It has also criticised Niti Aayog’s support to genetically modified crops. According to a source, Panagariya was upset that nobody from the government stood up for him or the Niti Aayog.
In September last year, Panagariya, India’s sherpa to the G20, said at the G20 summit in Hangzhou that India was not ready “in terms of domestic actions” to ratify the Paris agreement on climate by the end of 2016. But later that month, at the BJP’s national council meeting in Kozhikode, Prime Minister Narendra Modi announced that India would ratify the Paris accord on October 2.
Panagariya had also differed with Chief Economic Advisor Arvind Subramanian’s proposal on launching a universal basic income scheme. Panagariya argued that India does not have the fiscal wherewithal to implement such a scheme. “At the current level of income and our needs for investment in health, education, infrastructure and defence, we simply do not have the necessary fiscal resources to transfer a reasonable basic income to 130 crore Indians,” Panagariya had told The Indian Express in an interview in January.
“The Tendulkar urban poverty line at 2011-12 prices is Rs 1,000 per person per month. Due to inflation between 2011-12 and now, at today’s prices, this sum would be significantly larger. But transferring even Rs 1,000 per month to all Indians would cost Rs 15.6 lakh crore (Rs 1,000 x 12 months x 130 crore people) a year. We simply do not have this magnitude of fiscal resources,” Panagariya had said.