Neymar to PSG transfer: Barcelona confirms he wants to leave

NEYMAR has told Barcelona that he plans to leave the club, with a blockbuster move to Paris Saint-Germain seemingly imminent. 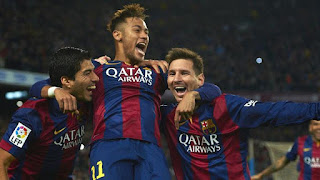 Barcelona responded Wednesday with a statement saying the Brazil striker’s 222 million euro ($330m) release clause must be paid in full, a scenario which until recently seemed beyond the reach of any rival.
Barcelona said Neymar and his father met with club officials Wednesday to say he wanted to leave. Club spokesman Josep Vives said the team “referred them to the release clause in his current contract, which as of July 1 is 222 million euros, which must be paid in full.”
If PSG pays the clause, it would shatter the previous world record transfer of 105 million euros (then $156m) that Manchester United paid for France midfielder Paul Pogba last year.
Neymar spent 30 minutes at the club’s training ground in Sant Joan Despi telling his teammates and coach Ernesto Valverde that he wanted to leave. Valverde gave him permission to go.
Neymar’s teammate Lionel Messi posted a farwell message (below) on his Instagram page which read:
“It was a huge pleasure having shared all those years with you, my friend @neymarjr,” Messi wrote on Instagram next to a montage of pictures of both football stars high-fiving, embracing or laughing.
“I wish you lots of luck in this new stage in your life. See you soon tkm,” he added. “Tkm” stands for “te quiero mucho” (I love you loads).
Vives, however, noted that Neymar “is still under contract with FC Barcelona, but with temporary permission to not take part in the training session.” Last year, the 25-year-old Neymar signed a new contract with Barcelona that tied him to the Catalan club through 2021.
Barcelona said Neymar did not specify where he wants to play next, but the only club speculated to be after him – and one of few which could handle the cost of the transfer – is the Qatari-owned PSG.
PSG did not answer messages from The Associated Press seeking comment. Driving a blue Audi with two passengers, Neymar breezed in and out of the Baarcelona’s training ground outside the city. He had arrived in Spain on Tuesday night after holding publicity events for both his personal brand and Barcelona in China. 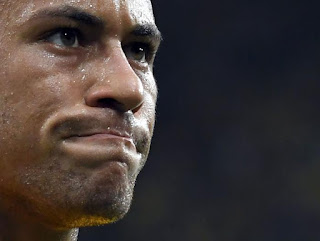 Club president Josep Bartomeu had repeatedly said that the club would do everything to convince Neymar to stay.
Both Bartomeu and Spanish league president Javier Tebas have said they will consider filing a complaint to UEFA if they think the PSG transfer violates financial fair play rules.
But in an interview with Spanish paper AS, La Liga chief Javier Tebas declared the league will challenge PSG’s right to pay the release clause, while then declaring that La Liga is bigger than Neymar.
“No. We will not accept that money from a club like PSG that, without belonging to La Liga, want to embrace the rights of our organisation,” he said.
He added: “The complaint is ready and will be presented to UEFA, the European Union, and the Swiss Courts, those are the tribunals that have power. Basically, La Liga will denounce the unfairness of competing against state-backed clubs; the teams that receive economic investment from countries that gift players to their fans at the cost of taking them from other clubs.
“In terms of PSG, it is a clear case of ‘financial doping’, with the club and the state. PSG’s accounts show that they have a larger commercial income than Real Madrid and Manchester United, which is to say that the value of their brand is greater than those clubs. Well, that is impossible.”
As for Neymar, he sledged: “He is a fantastic player, but honestly, I believe that La Liga is greater than Neymar. With the greatest of respect to him, I would be more worried if we were talking about [Lionel] Messi or Cristiano [Ronaldo].”
Strangely, however, PSG president Nasser Al-Khelaifi has told Moroccan television station Medi 1 TV: “All of this is talk. Neymar is a Barcelona player and we will see what happens with him.
“PSG respect all contracts that exist between other teams and their players. I hope to speak about this issue another time.”
READ  How ClickFunnels for Real Estate Works