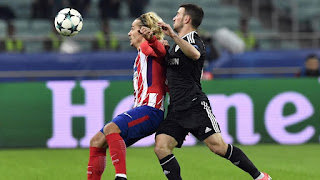 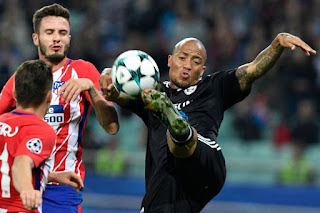 Atletico Madrid had secured just one point in their opening two Champions League games, and strugged to find their rhythm in the first half.
This was the first time an Azerbaijani team had met a Spanish side, and both sides seemed content to sit back and take a point. Antoine Griezmann missed the best chance late in the half.
After the restart, Qarabag held their own until Dino Ndlovu was caught in the box by Diego Godin. It appeared a foul and a penalty, but hte referee instead issued a second yellow for Ndlovu, sending him to the stands.
The draw sees Qarabag bottom but with the first Azerbaijani Champions League point, and Atletico are staring Europa League football in the face.

Was it a penalty? Qarabag can count themselves unlucky for Ndlovu’s sending off. He had been a dangerous presence on the pitch, and certainly seemed to be caught by Godin. It wasn’t a terrible decision by the referee, but it was probably the wrong one, and they will suffer into the next group game as a result of his suspension.

MAN OF THE MATCH

Ibrahim Sehic (Qarabag): A defence starts from the front, but it is built at the back. Sehic was calm throughout, and his early saves against Atletico kept his side in the game when their heads might have dropped following a goal. There was nothing exceptional about him, but having a goalkeeper to rely upon is crucial for a side looking to develop for the future.

26′ – GAITAN SHOT – A chance, the best and only of the game so far. Gaitan has a shot from distance, down the middle of the pitch, and it flies well over.
27′ – SEHIC SAVE – Carrasco is played in down the right, he takes a touch into the box, allowing the ‘keeper to rush out, and Sehic is out quickly to block.
39′ – GRIEZMANN CHANCE – Carrasco slips in Griezmann behind the defence. He has a one-on-one chance with the ‘keeper, but Sehic pushes the ball away and behind.
63′ – ALMEIDA SHOT – Michel plays the ball back to Madatov, who switches it back to Almeida, 30 yards out. He aims a curling shot at goal, but it’s straight at Oblak.
75′ – RED CARD! Ndlovu strides into the box, and takes a tumble in search of a penalty. It’s not at all convincing and the referee reaches for a second yellow for Ndlovu, sending him off. Godin did catch him and it did look a potential penalty.
84′ – PENALTY APPEAL – Gabi seizes on a loose save from Sehic, he spins and finds Torres at the back post, but Agolli nudges him from behind and sends a header well over. It should be a penalty but Qarabag ride their luck.

This was Azerbaijani football’s first ever Champions League point.
The former Chelsea and Liverpool striker headed miles over the bar from just four yards out in dramatic fashion to miss Atletico’s best opportunity to secure an important win. Some may claim it could have been a penalty, but perhaps it was just secret agent Torres on the case…!
READ  Book and know about Bajaj Qute Car India Launch Price, Engine & Specifications

[youtube https://www.youtube.com/watch?v=vOPwtVUq2wo]The new and upcoming windows by Microsoft is window 11 which have latest and best graphics design and user...